The Holy Quran (4) - The Miracle of Quran Subjects …

It's really strange how infidels and atheists deal with the Quran !!
They never read it comprehensively, they never knew what it talks about, then they fight it with all their strength and determination  ..

They pick verses from different chapters, scatter their wordings, remove them from their context, and explain them as they want with their devil minds and intentions ..

The most difficult thing while debating infidels is to read their bad comments against God, his book, or his Prophet.. 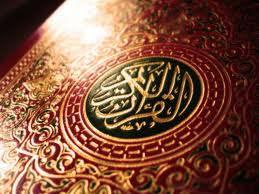 The holy Quran is the best book on Earth since 1400 years, read billions and billions times every year, billions of hours of its reciting are heard every year, its words are memorized by millions and millions of Muslims from all ages, gender, races over the world. but they still don’t respect it?

The Answer is because it's the book of God (ALLAH) only !! And ALLAH stated this fact in his book, he says:

We know indeed the grief which their words cause you (O Muhammad SAW): it is not you that they deny, but it is the Verses (the Qur'an) of Allâh that the Zalimûn (polytheists and wrong-doers) deny. (6:33)
Read more »
Posted by Abdallah Muslim at 4:53 AM 1 comment:

The Holy Quran (3) - The Most Eloquent Book…

The Holy Quran (2) - The Most Authentic Book…

We mentioned in part (1) that ALLAH promised in his holy Quran that he will reserve the Quran, and will protect the Quran from being corrupted, lost or destroyed by any mean or force whatsoever. ALLAH says:

And we will see how in the following sections:

For those who like to argue that Quran is not correct because it was written after Prophet Muhammad (PBUH) by 1 year, let's make a comparison between the bible and the Quran and which one of them is more authentic.

It's well known that the Bible was written after Jesus by group who never saw Jesus himself or lived during his time, or heard him directly and in time span of 70-100 years after Jesus !!

But in other hand, Quran was compiled only of sheets (leathers, bones, wood pieces) that were written at Prophet Muhammad (PBUH) time and under his direct supervision, and were reserved in one place 1 year only after Prophet death by Zaid Ibn Thabet, his own companion and who memorized the whole Quran during prophet time and was his own writer, and it was not only him but also hundreds of Prophet’s companions who memorized the Quran too.
Read more »
Posted by Abdallah Muslim at 6:24 AM 2 comments: 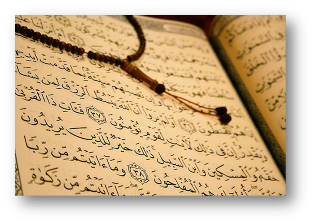 Unfortunate are those who didn’t know this holy book, or never read it, or never understand what it came up with..


Unfortunate are those who didn't listen to its words, and didn't read them in their prayers…
--------

The Holy Quran is the well known book all over the world as the Book of Islam. Muslims believe that it’s the last revelation from God to his Prophet Muhammad (PBUH), and these are words of God literally written in a book called "Mosahaf".

This article will try to explain some of the attributes of this great book, and show them to both muslims and non-muslims, maybe they will read this book with passion, and follow what it teaches.

Structure of this book:

Each chapter has number of phrases called "Aya", some chapters have +200's of Ayas, and the shortest has 3 Ayas only.

The Chapters are sorted from the beginning of the Quran to the end, from the longest to almost the shorter.

Miraculously, if we take the number of "Aya's" of each chapter with each chapter order starting from Al-Fatiha and draw them on excel, we get the names of "ALLAH" and "Muhammad" in Arabic and on the same graph !! [1] 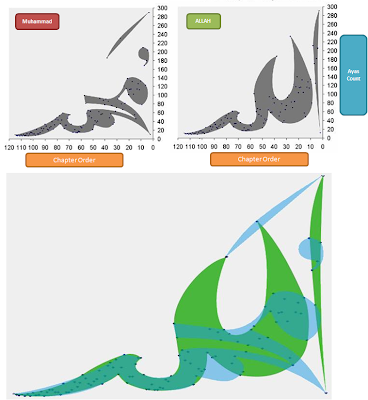 Read more »
Posted by Abdallah Muslim at 12:14 PM No comments: