Q- Why ISLAM is different?

Someone may ask: why Islam is different religion than any other religions in the world?!!
WHY, we see and hear more about Islam everywhere…
We see it in the media almost every day, there must be something about Islam, or Muslims or something related to Muslims work or actions …
We see it in their men walking on the streets and surely in their women (Hijab) …
And when we saw someone standing on the street, or in office, or in airport standing and praying, he will be definitely a Muslim…
And of course, if something bad happen, absolutely they will say: there must be some Muslims behind it ...
Why all that controversy about Islam, why it’s not like any other religion on Earth?
The Answer is very easy:
Because Islam is not a religion like any other religion on Earth. Islam can’t be compared with Christianity, or Hinduism, or Buddhism, or Sikhism, or Judaism or Zoroastrianism, or any other religion ever.
Mr. (X): REALLY and WHY’s that?.
For one reason: because it’s the religion of GOD “ALLAH” .
Mr. (X): I am expecting such answer for sure, but prove it first …


So, how come that some people worship an animal or dead body or man or woman as their god, and Almighty God never looks like anything we might think about in our small minds.
So, which one of all religions that insists on "God doesn’t and must not look like any of his creatures"? 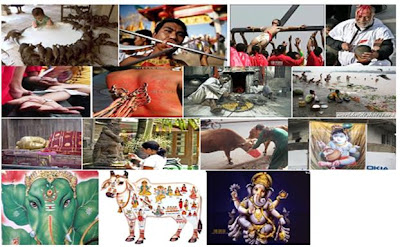 What are the aspects of such religion if it’s from GOD?
1.    Confirmation:
Islam is the only religion mentioned in its book as the path of God and the only accepted way to him:
This day, I have perfected your religion for you, completed My Favour upon you, and have chosen for you Islâm as your religion (3) [Al-Ma’aeda]

Truly, the religion with Allâh is Islâm. Those who were given the Scripture (Jews and Christians) did not differ except, out of mutual jealousy, after knowledge had come to them. And whoever disbelieves in the Ayât (signs) of Allâh, then surely, Allâh is Swift in calling to account.(19) [Al-Emran]

And whoever seeks a religion other than Islâm, it will never be accepted of him, and in the Hereafter he will be one of the losers. (85) [Al-Emran]
2.    Universality:
It must be universal and not related to a certain nation or country, and Islam is the only universal religion where it’s source people “The Arabs” are less than 13% of all Muslims 1.6 billions 2009. Where Hinduism is concentrated in India, Buddhism is China and East Asia, Christianity mainly in Europe and Western World.
3.    Adaptability:
Must fit any human being anywhere anytime, and Islam fits that exactly, but this doesn’t mean for all his commands, only those basic ones like the beliefs, prayers, fasting and treating people, kindly, but for Hajj (pilgrimage) is only in Makkah and for those who can afford it.
Other religions, you need status, Incense, special Music, etc..
In Islam, just wash yourself and pray on any clean place, and for other commands, you do them if you can only and within your capacity, whether physically or financially.
4.    Promoting:
If you know that you are holding the real God’s religion then what is your first duty  to other humans?
Surely, is to deliver God's message to them and save them from Devil deception.
And Islam is the most religion that insists on promoting its message to whatever you can and whenever you are and anytime possible, Prophet Muhammad (PBUH): “Deliver from me even a one verse”
5.    Insisting:
And this we hear it a lot, why Muslims insist a lot about showing their religion?
Because, if you know that you know the right path and all others humans following the path of Satan, what shall you do? You will try the most that you can to save your brothers and sisters, from following the Satan and eventually falling in hell, even if they insult you or fight you, you will keep trying tell they open their eyes.
Because of that you find thousands of muslims, or maybe 100 of thousands dedicate their lives to deliver the message of ALLAH to all human kind.
While in other religions, nobody is promoting their religion that much even for Christianity, and for other religions they may be interesting to know more and read about your religion than theirs.
6.    Assertiveness for Success:
The only religion that is totally sure, it will succeed eventually on all religions is Islam as promised in Quran:
They intend to put out the Light of Allâh (Islâm) with their mouths. But Allâh will bring His Light to perfection even though the disbelievers hate (it). (8)

He it is Who has sent His Messenger (Muhammad SAW) with guidance and the religion of truth to make it victorious over all (other) religions even though the Mushrikûn (pagans, idolaters, and disbelievers) hate (it) (9) [As-Saaf]
Other Religions:
They never said that: it’s the only path to God, even the word “Christianity” is not mentioned in all Gospels, nor the word of “Judaism” is mentioned in the Old testament, where “Islam” is mentioned many times in Quran as the only right way to worship God.
So, what Satan will do if he knows that you are following the right path?
He will force all other religions (following his ways) to fight the right path, and this is the answer that you mention it above, and you notice how all debates are between Islam and Christianity, or Islam and Hinduism, etc...
Finally, warning to those who leave the Right Path
Islam:
It’s the only religion that warns against following other paths and with a very painful and dreadful punishment that is: to reside forever in Hell fire.
And they will never cease fighting you until they turn you back from your religion if they can. And whosoever of you turns back from his religion and dies as a disbeliever, then his deeds will be lost in this life and in the Hereafter, and they will be the dwellers of the Fire. They will abide therein forever." (217) [Al-Baqra]
Other Religions:
There is not even a single warning mentioned about following other religions.
The following table: is the summary for why Islam is different than other religions and this is sure because it’s the only right path to God. 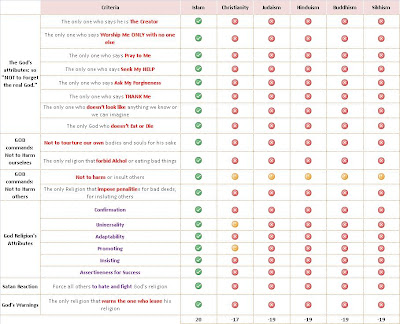 Thanks to ALLAH, Lord of the Worlds.
Posted by Abdallah Muslim at 12:43 AM

Email ThisBlogThis!Share to TwitterShare to FacebookShare to Pinterest
Labels: Islam